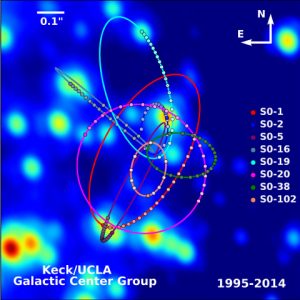 This image from the Keck telescopes shows the stars closest to the black hole hole and their orbits within the central 1.0 x 1.0 arcseconds of our Galaxy [http://www.galacticcenter.astro.ucla.edu/blackhole.html]. The superimposed orbits show the positions of the stars at earlier times in the period 1995-2014. The movements of these stars provide very convincing evidence for an invisible supermassive black hole at the centre of our Milky Way galaxy.

I am very impressed by the technology and seeing capability of the Keck Telescopes that enables the telescope to see through the clouds of gas obscuring the galactic centre and a high enough resolution to observe stars completing orbits around the black hole.

Although massive, the black hole in the centre of our galaxy is very modest compared to black holes in some galaxies which exceed billions of solar masses.